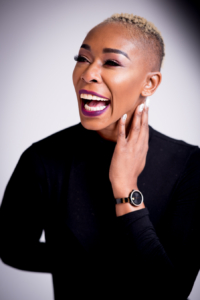 Shenetta Malkia is widely known throughout the Washington Metropolitan Area, Maryland and nationally. She is a spokesperson and advocate for suicide prevention and anti-bullying programs.  Malkia sat on the MD-SPIN advisory board and MD Governor’s Commission for Suicide Prevention from 2014 through 2019. Shenetta is the founder and executive director of Empowerment Essence. Empowerment Essence is dedicated to eradicating bullying and suicide beginning in Maryland & DC communities. Malkia is also a leading clinician and workshop facilitator for community organizations and government agencies.

She continues to seek and create innovative ways to grapple a growing problem within communities. As a sought-after speaker, Malkia’s voice continues to sound the trumpet for systematic change within schools and social service systems, which often ignores the signs of bullying and suicide. Malkia has been featured on radio, TV, and at community events. She was the key note Speaker for Maryland’s 26th Annual Suicide Prevention Conference and multiple conferences nationally and internationally.

To date, Malkia has touched and empowered thousands of lives. As a survivor of bullying and suicide her passion and purpose in life is a direct result of life experiences, which lead many support systems turning a deaf ear to her cries for help. Unfortunately there were no programs to assist when she reached out. Instead, she was told by school officials to ignore the bullying by classmates. This took her down a dark path that almost resulted in death. While she survived her personal suicide attempt, her good friend, reality show actress Gia Allemand of the Bachelor didn’t. Malkia was devastated by Gia’s  suicide in 2013. While grieving and hurting she was empowered to speak out on the importance of life. Her vision for Empowerment Essence is a direct result of resilience and regained strength. “One Life Saved Is One Life Given.”

A native of Queens, N.Y., she attended AIU in Atlanta where she studied T.V & film production. She later matriculated to Bowie State University majoring in Business Administration. Malkia has developed I Matter – Life Matters Film Productions which is dedicated to helping others tell their story and bring stories to life to further public awareness in the area of suicide and bullying.

Malkia is also the CEO of The PMs of the City. When it’s not mental health it’s everything real estate. She also was an award-winning Managing Director with the American Income Life.

Today, Malkia remains active in the field of cultural arts and television production where she works as a model and actress. One of her crowning achievements came in 2013-2014, when she was named Ms. Baltimore United States 2014, Ms. Maryland United States 2014 and Ms. Congeniality United States 2014. These honorable titles are just a small reflection on Malkia’s love for others and the purity of her heart. She lives a life of equality, resilience, and strength.

Everything with Love ~Malkia

Did you miss the interview? Here is the replay. Tune in on the following platforms via Speak Life Tour:

JOIN OUR TEAM
Go to Top